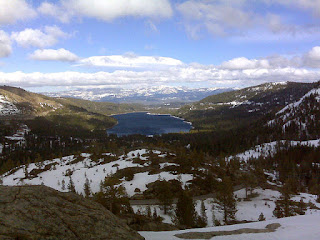 Donner Lake overlook is one of the most historically significant sites in the United States. In addition to the fabulous view, Donner Pass is arguably the most significant link between California and "back east".
It was within spittin' distance of the viewpoint that the first covered wagons crossed the Sierra in 1844. The Stephens-Townsend-Murphy party pioneered the first trail to California, fortunately right here for the '49ers, just a few years later. By spittin' the other way, you might hit petroglyphs etched into granite by Native Americans who sat here before Christ walked the earth.
Just up the hill from there is the Sierra crossing of the transcontinental railroad, built by hundreds or thousands of unknown Chinese working for the Central Pacific railroad in the mid-1860s during a desperate race with the Union Pacific railroad. This particular stretch has two significant features, the 1,654 foot long Summit tunnel and the 75 foot tall "China Wall", a dry laid granite wall and fill spanning a chasm. The wall was built by hand and leverage, and during its active life it supported billions of tons of railroad equipment, freight, and passengers. No one knows how many men died during construction, victims of avalanche, explosion, and exposure. This was the great engineering achievement of the railroad, and though it was de-tracked in 1993, it would still work for trains if the railroad were so interested.
In the early 20th century, the Lincoln Highway, the first automobile route to cross the United States came through this same pass, following a wagon road built in 1864. The list goes on and on.
Did I mention that this is also part of my back yard? Maybe office would be a better description. I'm an interpreter-- naturalist, if you prefer, but I use "Interpreter" because I'm better at cultural history than natural history. Both names have problems. When I say "interpreter," people ask me what languages I speak (a smattering of Spanish and pig latin, just so you know). If I say "naturalist," some people think I'm a nudist (I might tell that story later). I manage the interpretive program for a national forest, and though I worry quite a bit about budgets and politics and the sheer mechanics of finding subjects, developing themes, buying supplies and equipment, hiring staff, and the other stuff, I am constantly amazed and entranced at this amazing opportunity and responsibility I have, and each day is a genuine wonder.
Through what I do, I have the chance to expand people's minds, to alter their perception, and create a constituency for the land. Every year, thousands of people come to our programs, or read our wayside signs, or pick up our publications, or hear a story or song that, if I do my job right, could plant the seed of lifelong learning and appreciation.
It doesn't always work, of course, and even when it does, we don't always have the impact we would prefer, but there are the sublime moments when we connect a visitor to the resource. That "aha!" moment can last a lifetime, and we've had some remarkable experiences with our visitors and clients.
So that's a very long winded way of explaining what I hope this blog will be about-- interpretation. Theory, explanations, successes and failures. Hare-brained ideas and schemes, comments, and frustrations. This is an amazing profession that's given me the opportunity to learn a lot, to share some of what I know, and to have incomparable peers who give me goosebumps when I realize how smart and talented some of them are.
Well, that's my story and I'm stickin' with it. More later.
Posted by phil at 9:58 PM No comments: